In contrast to the conventional non-volatile memories, Flash and EEPROM, the content of an FRAM cell is not stored in the form of charge carriers in a ‘floating gate’. The information – logically 0 or 1 – is contained in the polarisation of the ferroelectric material lead zirconate titanate, PZT (Pb (ZrTi)O3). This material, is placed between two electrodes in the form of a thin film, in a similar way to the structure of a capacitor. 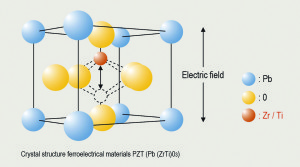 An FRAM memory cell has the same structure as a DRAM cell and consists of a transistor and a capacitor, but in this case the FRAM cell contains a capacitor with a ferroelectric dielectric. Since no large charge quantities have to be displaced, charge pumps, used to generate
higher programming voltages, are not necessary. As a result, FRAM technology is much more energy efficient than Flash or E2PROM. Since FRAM operates based on random access, write process can be completed without any delay. Write and Read access times are in the 2–3 digit nanosecond range and comparable with those of RAM. As a result, FRAM is able to complete the writing process even at sudden power outage, thus ensures data integrity. The maximum number of write/delete cycles for Flash and E2PROM is between 100,000 and 1 Million. By comparison with over 10 trillion write/read cycles (1013), the lifetime of FRAM memory is almost unlimited. Writing/reading access could theoretically take place on a cell for over 300,000 years at one-second intervals. A by-product of this technology is a high resistance to  radiation because, unlike with floating gate memories, alpha, beta and gamma radiation cannot harm the stored data. FRAM is therefore very well suited for medical or space-science applications, or applications in the food industry in which radiation can be used for disinfection.